Le Tausagi, an outreach group comprised of staff from American Samoa environmental and youth agencies, held their annual Enviro Discoveries Summer Camp on July 14th and 15th, 2016. Throughout the 2-day event, about 30 children and 15 staff and volunteers discussed local natural resources and the impacts that humans have on them. As the  Coral Reef Management Fellow, I used a watershed model to explain how we can help protect the coral reef ecosystem by preserving and planting vegetation in our watersheds and reducing land-based sources of pollution.

The camp culminated with an installation of a 600 ft2 rain garden that now captures stormwater runoff from an adjacent basketball court and rooftop. The garden was installed at a public park located in the impaired Nu’uuli Pala Lagoon watershed. Rain gardens like this one are stormwater best management practices (BMPs) that use plants, mulch, and soil in a depression to slow down and clean stormwater runoff, letting it infiltrate the ground. Stormwater contributes to poor surface water quality and often contains pollutants, such as sediment and nutrients, that can damage coral reef ecosystems. Rain gardens are one type of practice that can be used along with others to help improve water quality and the health of coral reefs.

Hot of the presses from the U.S. Coral Reef Task Force are two new tools to help in effective watershed management from ridge-to-reef!

1) Priority Ecosystem Indicators:
The first is a series of ecological indicators and measurements to evaluate the success of existing watershed management efforts. The indicators look at coral communities, as well as sediment and water quality. Nearly all were selected from existing national-scale monitoring efforts by federal agencies. 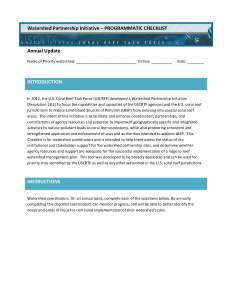 2) Programmatic Checklist:
The second is a user-friendly checklist that walks watershed coordinators through a series of questions to help them implement a successful ridge-to-reef watershed management plan. The checklist helps gauge support from stakeholders–including local groups and federal agencies–and documents overall progress as a ridge-to-reef watershed management plan is implemented. The checklist is meant to be completed on an annual basis to track progress.

In the three months since the U.S. Coral Reef Task Force last met, efforts to conserve and manage our coral reefs have continued. Thankfully, the winter season brought cooler waters and a much needed reprieve for our coral reefs, many of which have suffered back-to-back years of bleaching. However, in areas like southeast Florida, the number of corals impacted by an unprecedented disease event continues to grow and the cause(s) of the disease has yet to be identified.

We must stretch beyond the ‘status quo’ and work together, as federal agencies and jurisdictions, to make a difference NOW.

At each biannual U.S. Coral Reef Task Force (USCRTF) meeting, the AIC Chair presents a report of AIC priorities, challenges, and accomplishments in every AIC jurisdiction and the Freely Associated States since the previous Task Force meeting. Check out the newest AIC Chair’s Report presented at the 35th USCRTF meeting in Washington D.C.

Check out this fun video of the Coral Reef Initiative (CRI) intern cohort (and CNMI Micronesia Challenge Young Champion, Carey Demapan) during a field trip to the Managaha Marine Conservation Area! How many of these bright young CNMI stars do you know or recognize?

The video was compiled and edited by CRI intern Romana Chong. Original song written and performed by Nikkie Ayuyu. 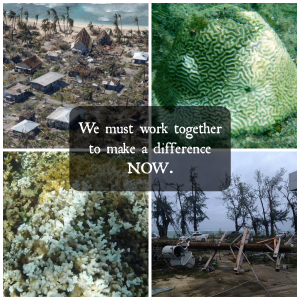 Over the last several months, the jurisdictions and islands have faced extraordinary events that have impacted coral reefs and strained both resources and capacity.

CNMI continues to recover from Typhoon Soudelor, which hit in early August leaving Saipan without electricity or water for nearly three months in some areas. The jurisdictions have seen coral bleaching on reefs just barely recovering from last year’s bleaching event. Reports of bleaching from all across the Main Hawaiian Islands came in as early as September, as a result of water temperatures up to 91 degrees F. Florida is dealing with an unprecedented coral disease outbreak – the largest ever seen on the Florida Reef Tract.

And still, huge steps forward have been made in the jurisdictions and Freely Associated States (FAS) through accomplishments such as:

The first rain garden in American Samoa installed in Faga’alu. Multiple communities were trained and funding has been identified to expand this practice to other watersheds.

In CNMI, at a Garapan Conservation Action Planning Meeting, participants discussed strategies to improve conservation in this priority watershed.

Hawai’i demonstrated success in urchin hatchery and coral nursery operations for mitigation. The state is also working toward establishing the first coral mitigation bank in the United States.

A new Visitor’s Center was created at the St. Croix East End Marine Park in the U.S. Virgin Islands to help highlight the value of coral reef ecosystems.

In the Federated States of Micronesia, a cooperative effort helped pass the landmark “Shark Bill”, which covers the nearly 3 million square miles of EEZ.

The Marshall Islands are working set forth new temporary regulations regarding fishing closures, fishing techniques, fish sales, and fish sizes in order to protect herbivores in anticipation of a bleaching event.

The Palau International Coral Reef Center is studying the impacts of two super-typhoons on Palau coral reefs and will quantify their recovery potential and offer adapted management strategies to policymakers.

Awesome work managing and conserving our coral reefs occurs every day in the jurisdictions and FAS. We must continue to work together towards a better future for our coral reef ecosystems.

If you’re thinking “this can’t be good,” you’re right. But don’t lose hope!

Quick Side-bar:
Coral bleaching is…”When corals are stressed by changes in [ocean] conditions such as temperature, light, or nutrients, they expel the symbiotic algae living in their tissues, causing them to turn completely white.” (NOAA website)

Can corals recover from bleaching? YES. But, if bleaching lasts a long time, the coral usually dies. Interested in learning more? Check out our post and get the 4-1-1 on coral bleaching!

If you’re like me, you’ve asked yourself, “so what can I do?” There’s A LOT that we can do!

We need our coral reefs.

Why? Check out these facts (International Coral Reef Initiative):

Coral reefs are amazing. We need them and need to work together to make sure they’re around for future generations.

All Islands Coral Reef Blog
Create a free website or blog at WordPress.com.